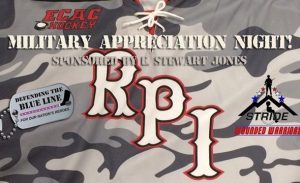 The Rensselaer Polytechnic Institute (RPI) men’s hockey team will be wearing special camouflage uniforms on Friday, February 21, 2014, when it celebrates Military Appreciation Night at the Houston Field House, during an ECAC Hockey game against St. Lawrence University. The event, which is sponsored by the E. Stewart Jones Law Firm, will benefit a pair of charitable organizations that support military veterans and their families.

One of those organizations is Defending The Blue Line. A non-profit which works to ensure that children of military members are afforded every opportunity to participate in the game of hockey. They accomplish this by providing free equipment for military kids, hockey camps, special events, and financial assistance for registration fees and other costs associated with hockey.

The other, Wounded Warrior Program, is a locally-based veterans service organization that offers a variety of programs, services, and events for wounded veterans of the military actions following the events of September 11. It operates as a non-profit organization with a mission to “honor and empower Wounded Warriors” of the United States Armed Forces, as well as provide services and programs for the family members of its registered veterans.

Fans can bid on the one-time game-used jerseys during Friday night’s contest, which starts at 7:00 pm. For tickets or additional information on the RPI Hockey Military Appreciation Night sponsored by E. Stewart Jones, please visit the RPI Athletics website.