The E. Stewart Jones legal team is pleased to have been part of the defense team for the federal retrial of former New York State Senator Joseph L. Bruno. After being tried for a second time, Senator Bruno was acquitted and found not guilty by a jury of his peers, of all political corruption charges. In Senator Bruno’s first trial, he was sentenced to two years in prison, but the conviction was thrown out when the Supreme Court ruled that the honest services charges must include proof of a kickback or bribe. The retrial was held at the United States District Court, Northern District jury deliberation. 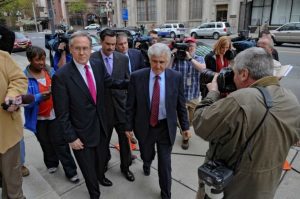 For more information regarding the outcome of the Bruno trial please click on the links below: