TROY – The E. Stewart Jones Hacker Murphy Law Firm is once again teaming up with the Tri-City ValleyCats to recognize community heroes from across the Capital Region. They are seeking nominations from organizations and plan to select a “Starting Nine” of Community Heroes that will be recognized at the ValleyCats’ August 12th game against the Auburn Doubledays. 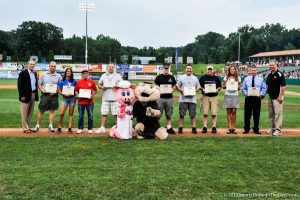 In the third year of the Home Run Community Heroes program, the ValleyCats and the E. Stewart Jones Hacker Murphy Law firm plan to honor heroes from all walks of life who have made a difference in their communities. This will include personnel from the military, law enforcement, firefighter/EMT agencies and non-profit organizations, as well as teachers, children and everyday people who have helped make the Capital Region a better place to live.

“We consider giving back to our community to be a goal on par with providing the highest caliber of service to our clients,” said E. Stewart Jones, Jr. “We are proud to help continue this program and honor these important Community Heroes at another fun-filled ValleyCats game.”

“This is a great opportunity to recognize some of the individuals that make the Capital Region such a great place to live,” said Matt Callahan, general manager of the Tri-City ValleyCats. “We are excited to continue this partnership with the E. Stewart Jones Hacker Murphy Law Firm, another active member of our community.”

Chosen winners will be recognized on the field as part of a special ceremony prior to the ValleyCats game on Wednesday, August 12th. Each member of the “Starting Nine” will also receive four tickets to enjoy the game, food and drinks as guests of the E. Stewart Jones Hacker Murphy Law Firm in the Diamond Club on the suite level at “The Joe.”