Serving Victims in Albany, Saratoga, Troy, Schenectady and all of Upstate New York 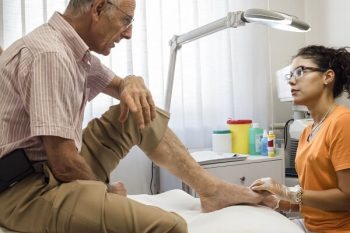 Podiatrists are foot doctors – they specialize in conditions of the feet, ankles, and nearby areas. A podiatrist may treat anything from an ingrown toenail to fallen arches (“flat feet”). Unfortunately, malpractice is not uncommon. However, it can be challenging to win a malpractice claim against a stingy insurance company or a stubborn doctor concerned about his reputation. If you have suffered an injury due to Medical Malpractice don’t hesitate to call a knowledgeable Albany Podiatry Malpractice Attorney to discuss your case.

There are about 14,000 podiatrists in the U.S. Podiatrists do not hold MDs. A qualified podiatrist must have graduated from one of seven podiatric medicine schools in the U.S. that offer four-year degrees that are similar to an MD degree but more specialized. In New York, podiatrists are required to undergo one year of post-graduate hospital training after graduation.

Podiatry treatment may be sought for bone spurs, bunions, ingrown toenails, flat feet, diabetes-related foot problems, and other conditions. The most common bases of podiatric malpractice claims are:

The Certificate of Merit

To file a New York medical malpractice lawsuit, you must submit a Certificate of Merit. This certificate must normally include a statement that the lawyer has consulted at least one other doctor about your case and has concluded that the lawsuit has a “reasonable basis.”

Many Medical Malpractice Cases Are Settled out of Court

At E. Stewart Jones Hacker Murphy, our Podiatry Malpractice Attorneys know how to negotiate with medical malpractice insurers and how to gather evidence that will convince the insurer it is better to settle than to risk a lawsuit (our stellar courtroom track record is also useful in this regard).

The Statute of Limitations

Does New York place a cap on medical malpractice damages?

Will I lose my claim if my injury was partly my fault (if I failed to follow the doctor’s instructions, for example)?

New York applies a “pure comparative fault” system whereby you lose the percentage of your damages that is attributable to your own degree of fault:

Does New York apply a “discovery rule” that can extend the statute of limitations deadline for filing a medical malpractice lawsuit?

A discovery rule is a rule delaying the beginning of the statute of limitations period (30 months in New York) until the patient discovers or should have discovered the malpractice. New York’s discovery rule is very limited and is very unlikely to apply to a podiatry-based medical malpractice case.

What actions should I take if I suspect that I am a victim of podiatry-related medical malpractice?

The World Has Noticed

Now is the Time for Action

The sooner you act on a potential podiatry malpractice claim, the better your chances will be. We also handle claims throughout the Capital Region, upstate New York, and beyond. If you suspect that you or your child is a victim of podiatric malpractice, discuss your case with Albany Podiatry Malpractice Lawyer. Contact us today to schedule a free consultation.